Meet Mr. Famous and a Few of His Fellow Famous Fur Friends 85 million American Families own pets. Many such households include the rich and famous. In fact, some celebrities earned have notoriety, in part, because of the eccentricities of their unusual pets. These “famous” pets enjoy lavish pampering and responsibilities associate with the glaring spotlight of fame. The following are just a few of the pets whose fame rivals that of their masters. Audrey Hepburn’s Yorkshire Terrier, Mr. Famous, inspired a Yorkie craze in Hollywood. Her constant companion, he even co-starred with her in Funny Face. Hepburn was distraught when her Fur Baby died. Attempting to comfort her, her husband gave her another Yorkie puppy, whom she named Assam of Assam. Paris Hilton’s chihuahua, Tinkerbell, was her constant companion until Tinkerbell’s death in 2015. The chihuahua inspired the “purse dog” trend, with folks mimicking her tendency to tuck the pet in a bag under her owner’s arm. After Tinkerbell’s death, Paris brought home more dogs and even commissioned construction of a mini replica of her home. The mini-mansion came complete with designer furniture and air conditioning. Is this what they meant by a dog’s life? George Clooney’s pet pig, Max, was a 300 lb. Vietnamese Potbellied pig who slept in his bed. (And all those years we thought Clooney was a bachelor by choice!). Apparently Max enjoyed laying across the doorway, preventing people from entering or exiting the house. Max passed away in 2006. But George has not yet adopted another pig. Some attribute his newfound pet-free existence to his wife, Amal. Oprah Winfrey treats her dogs like furry children. The original set were Cocker Spaniels, Solomon and Sophie. After their deaths (at the ripe old ages of 14 and 13), Oprah continued adding more fur babies to the family, saying she considers herself a better person because she owns pets. Hear, hear! Mildred Kerr Bush, an English Springer Spaniel, was once referred to as, “the most famous dog in White House history” after President George H.W. Bush referenced her in a re-election speech. The media loved capturing her various antics. And she was beloved both by the Bush family, and the public. She died in 1997, at 12 years of age.

Do you remember these pets? Did you get in on the Yorkie or purse Chihuahua phases? One thing is certain; pets enrich our lives, regardless of celebrity status.

Located in Ontario, California, Petique Inc is a woman- and family-owned business specializing in pet supplies and consumables. Pet owners ourselves, we share a passion to create a positive, healthy and fun environment for furry family members. We also strive to create quality pet products that conserve ecological resources whenever possible, and consciously avoid depleting natural resources. With more than 30 years of experience in manufacturing, product development and design, we take pride in creating eco-friendly and non-toxic items, reliable travel gear and innovative products. Contact us today, visit our website or call (909) 673-0998.

Let customers speak for us

We brought our cocker spaniel home at the age of 8 weeks, she was a very busy puppy and liked being outside immediately after we brought her home. My wife found the stroller on line and purchased it. The dog and I get up at 5:30am every morning, and her routine is immediately outside to do her business and back in to eat. By 6:00am I strap her in to the stroller and off we go on a 3 mile run. She loves it and is ready to go every morning. We have run over 500 miles on the stroller and it is time to replace the wheels. Very durable and comfortable for her.

Awesome stroller for our aging pup. Now we can take her everywhere.

My 11 year old, 70 pound, olde english bulldog fit perfectly inside! He loves going for rides and can lay down. He learned how to use the cart very quickly. I places his bowl in the cart for meals for 3 days then said load up and he walked right in! I am so happy he loves it! The cart goes over curbs and stairs well but it isnt built for intense off-road terrain. It is well made, easy to remove hair, and light enough to easily put in and out of a car trunk. 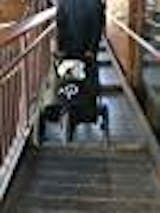 We purchased one of your strollers last year, when our dog was ill. After Bailey passed, Robyn the cat inherited the stroller. We've been having all sorts of fun "adventuring" with Robyn, who is fifteen, an indoor cat, and has never experienced much of the world before. Thank you for creating such a quality product! 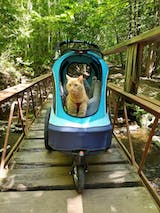 We have just received the leash and the shock absorbing feature was, indeed, a game changer (as Kelvin mentioned below) during Biscuit's walk this evening. He is a puppy, so we are training him to walk next to us. Highly recommend.